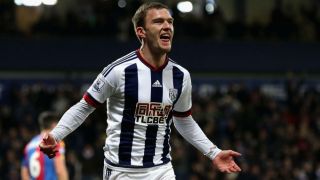 A trio of goals in the first 31 minutes helped West Brom to a 3-2 home win against Crystal Palace, extending the visitors' winless run to 10 Premier League games despite their second-half fightback.

Craig Gardner gave West Brom the lead in the 11th minute, tapping in after Wayne Hennessey turned Salomon Rondon's low shot back into the danger zone.

And it was 2-0 nine minutes later - Craig Dawson headed in Gardner's precise free-kick to give Tony Pulis a dream start against the club he kept in the top flight in the 2013-14 season.

Connor Wickham gave Palace a lifeline shortly after the interval when Jonas Olsson and Ben Foster got in a muddle and the striker thumped in a late second goal, but West Brom held on for maximum points.

Pulis recalled Dawson, Gardner, Claudio Yacob and Gareth McAuley after his side exited the FA Cup in a 3-1 defeat at Championship side Reading, while Alan Pardew named the same team that knocked Tottenham out of the cup last weekend.

After a tight first 10 minutes, Berahino played in strike partner Rondon and Hennessey could only block the Venezuela international's shot back into Gardner's path for an easy finish.

Gardner turned provider for West Brom's second, finding Dawson with a well-taken free-kick from near the byline - the defender planting a firm header into the corner.

Confidence was flowing through West Brom and their third goal duly arrived just after the half-hour.

Dawson's pass found Rondon and the striker fed Sessegnon, who superbly picked out Berahino's run into the penalty area - the volleyed finish giving Hennessey no chance.

Jordon Mutch headed Martin Kelly's cross wide after 38 minutes as shell-shocked Palace tried to find a way back into the game before Chris Brunt, who was hit by a coin thrown by a West Brom supporter at Reading last weekend, was stretchered off with a knee injury.

Gardner almost scored a fourth goal for West Brom when his 25-yard free-kick hit the post after a big deflection off Joel Ward, with Joe Ledley's shot blocked on the line to round off a busy half.

Palace were gifted a goal back just three minutes into the second half. Olsson and Foster left a bouncing ball for each other and Wickham took advantage, nipping in to lob the goalkeeper and tap into the open goal.

Berahino almost restored West Brom's three-goal cushion moments later, cutting in off the left flank and hitting the crossbar with a curling shot, before Hennessey saved from Sessegnon after 70 minutes.

Palace grabbed another goal back with 10 minutes to go when Wickham lashed a powerful drive into the top corner for only his third Premier League goal of the season.

The visitors pressed hard for an equaliser, with Gardner clearing Scott Dann's header off the line and Ward volleying just off target, but West Brom held on to climb above Palace to 13th place in the Premier League table.