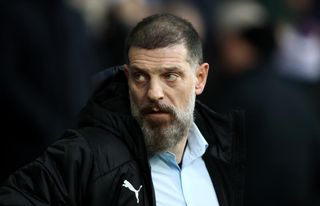 Slaven Bilic was frustrated his West Brom side failed to open a bigger gap at the top of the Championship following the 2-2 draw at Charlton.

Bilic’s side moved one point above Leeds after Marcelo Bielsa’s side lost at home to Sheffield Wednesday.

But Albion manager Bilic admitted he was disappointed at his side’s failure to beat the struggling Addicks despite twice taking the lead.

And he made it clear he was unhappy with the way Albion were twice undone by Charlton set-pieces.

He said: “We took the lead twice and we were controlling the game and after 2-1 we had many good situations but we didn’t score the third goal.

“It’s very frustrating that we have conceded a couple of goals from set-plays. And if you do that, it is unlikely you are going to leave the field unpunished.

“It can happen once, OK. But it can’t happen as often as it has been. They didn’t outplay us but you can lose any game in the Championship.

“If this was the position with two games to go I would be happy. But unfortunately there are 19 games to go.

“This was a great opportunity to go three points clear.”

Kenneth Zohore put Albion ahead in the 22nd minute on his first league start since August, having scored the winner in the FA Cup meeting between the two teams six days previously.

Bilic said: “For the goal he worked really hard, he pressed them. He is a very useful player and he is good, he was in the box running in channels and he created chances by stretching them.”

Hal Robson-Kanu restored the visitors’ lead at the start of the second half with a close-range finish, but Charlton claimed a point in the 76th minute when keeper Sam Johnstone was unfortunate to deflect the ball into the net after pushing Tom Lockyer’s header against the post.

The goal went down as a Johnstone own-goal, but Charlton boss Lee Bowyer insisted it should be credited to Lockyer.

He said: “It’s Tom Lockyer’s goal. He’s done everything. He’s worked hard to lose his man, great header. And what, because the keeper’s tried to save it, it’s not his goal.

“I thought there were a lot of positives, especially to come from behind twice shows the character and togetherness to keep going against a good West Brom side.

“I’m pleased my players could stand up to their physicality.

“Josh deserved his goal. He wasn’t meant to be on that side! But fair play to him, he hit it well. It’s not been going for him and let’s not forget he was playing for Enfield a few weeks ago. I’m really pleased for him.”

Bowyer is hoping to conclude negotiations about a fresh contract with the club’s new owners soon with his agent set to meet chairman Matt Southall.

He said: “Hopefully they will put something together and I sign Monday morning. That would be the perfect scenario for me and the club, for the stability.”