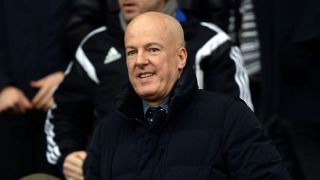 New owners could be in place at West Brom by the end of the month after the club confirmed an interested party had been granted exclusivity in negotiations.

Chairman Jeremy Peace - whose company West Bromwich Albion Holdings owns the majority share in the Premier League club - has been looking to sell in recent months.

The club confirmed in a statement on Friday that they hoped new owners would be in place by the end of July, reassuring fans that preparations for the new season would not be affected.

"Chairman Jeremy Peace today confirmed that exclusivity has been granted to one party interested in the purchase of West Bromwich Albion Holdings Ltd," read the statement.

"This follows discussions with several interested parties in the wake of his decision earlier this year to consider strategic options for the future development and legacy of the club.

"This process should be completed by the end of this month and in the meantime, the Club wishes to assure supporters preparations for the new season will remain unaffected.

"They remain in constant dialogue over the re-shaping of the first-team squad for the 2015/16 Barclays Premier League campaign."