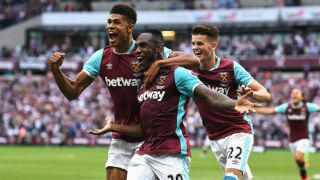 Michail Antonio's late header sealed victory for West Ham as they marked their first Premier League game at London Stadium with a 1-0 win over 10-man Bournemouth.

The former Nottingham Forest winger, who netted in West Ham's final fixture at Upton Park, had a weak to forget following a poor display in the defeat to Chelsea, but did brilliantly to nod home from close-range in the 86th minute after latching onto Gokhan Tore's cross.

In stark contrast to the corresponding fixture last term – which finished 4-3 to Eddie Howe’s side – Sunday’s affair was a slow-burner, with the teams mustering just one shot on target between them in a first-half shorn of clear-cut chances.

Bournemouth came out strongly after the break, Jordan Ibe squandering a gilt-edged opportunity before Adrian pulled off a magnificent stop to deny Josh King, with Tore hammering a strike into the side-netting at the other end.

Howe's side were reduced to 10 men late on when Harry Arter picked up a second yellow card, and Slaven Bilic’s men duly ensured their numerical advantage was not wasted as Antonio knocked in the winner.

Despite a vibrant atmosphere prior to kick-off, the hosts got off to a flat start, and were unable to assert any authority on proceedings during the opening stages.

With Dimitri Payet and Andy Carroll – who Bilic confirmed is set to miss several weeks with a knee injury – having joined West Ham's growing injury list, Bilic's side lacked guile in the final third, though Tore did go close with a curling effort that sailed just over.

With Bournemouth offering little going forward, Besiktas loanee Tore continued to represent West Ham's greatest threat, and he could well have been awarded a penalty had the officials spotted Charlie Daniels’ late challenge was fractionally inside the area.

However, it was not until the 40th minute that either goalkeeper was called into action, Artur Boruc doing well to prevent Enner Valencia's deflected strike flying in at his near post.

Bournemouth should have taken the lead shortly after the interval as Ibe raced in behind West Ham’s defence, but, after electing to try and pick out Calum Wilson rather than shoot, their record signing could not apply the finishing touch.

Howe’s men continued to up the pressure, and would have opened the scoring moments later had Adrian not managed to tip King’s blistering strike over.

Those chances seemed to spark West Ham, who lost just one of their last 17 Premier League matches at Upton Park, back into life, and Tore again went close when his venomous volley nestled into the side netting.

West Ham were handed a lifeline with just under 15 minutes remaining as Arter, who earlier fell foul of new directives to enforce bookings for dissent, received his marching orders after he pulled back Cheikhou Kouyate.

And in a stadium that played host to so many momentous sporting occasions during the 2012 Olympic Games, Antonio made sure that West Ham got life at their new home off to a winning start, before substitute Jonathan Calleri squandered a golden chance to extend their lead in stoppage time.