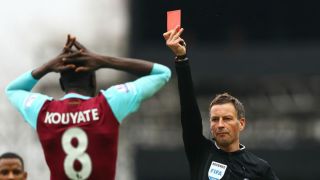 West Ham had Cheikhou Kouyate sent off and saw their Champions League qualification hopes suffer a blow as Dwight Gayle equalised to earn Crystal Palace a 2-2 draw in the Premier League at Upton Park.

The hosts came from behind to lead after Adrian's error from Bakary Sako's free-kick presented Palace defender Damien Delaney with the opening goal on Saturday.

West Ham hit back almost immediately, Manuel Lanzini scoring with a neat finish after Palace failed to clear Michail Antonio's cross into the box, and Dimitri Payet put West Ham in front before half-time, whipping a sensational free-kick beyond the helpless Wayne Hennessey for his ninth Premier League goal of the season.

Slaven Bilic's side could not hold on after Kouyate was dismissed for a lunge on Gayle, who scored the equaliser with 15 minutes to go, the striker neatly finishing after a kind deflection.

Palace had won on their two previous visits to West Ham, but Alan Pardew's side have now gone 14 Premier League matches without a victory despite reaching the FA Cup semi-finals, while West Ham are unbeaten in nine games in all competitions.

West Ham were without James Collins (hamstring) and Antonio filled in at right-back, while Jason Puncheon made his first start for Palace in two months, but Yohan Cabaye and Emmanuel Adebayor missed out.

Adrian made a comfortable early save from Joe Ledley's header before Antonio tested Hennessey, who was equal to his shot.

But Adrian, who was making his 100th appearance for West Ham, was beaten after 14 minutes - and the goalkeeper was to blame.

Sako's free-kick evaded everyone in the box but Adrian flapped the ball straight on to the head of Delaney, who nodded a simple finish into the open goal.

Palace's lead was short-lived as Lanzini levelled the scores within three minutes by tucking a shot into Hennessey's bottom-right corner after Diafra Sakho's header deflected to him off Scott Dann.

Hennessey made saves from Sakho and Payet as the hosts pressed and Puncheon should have put Palace back in front after 32 minutes, but volleyed over from six yards.

Sakho put a free header wide after 38 minutes but that miss was soon forgotten when Payet stepped up to take a 20-yard free-kick.

Palace arranged a seven-man wall but the France international crashed an unbelievable strike past Hennessey, who stepped the wrong way, the ball dipping late to go in off the crossbar.

Lanzini forced a good save from Hennessey after 56 minutes before Aaron Cresswell cleared Sako's 22-yard shot off the line after a poor Kouyate back-pass caused chaos.

Kouyate was then sent off for the second time this season, the midfielder dismissed in the 66th minute for diving in on Gayle, and Sako blazed a volley wide as the visitors sought an equaliser.

Adrian made a fine save from Mile Jedinak's drive but he could not deny Gayle, who slotted in moments later after Pape Souare's cross deflected off both West Ham centre-backs.