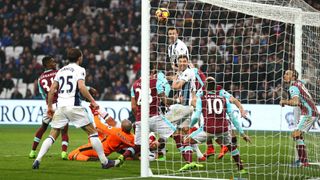 An injury-time header from substitute Jonny Evans saw West Brom deny West Ham in the trademark style of manager Tony Pulis, as the Baggies pounced to snatch a dramatic 2-2 draw at London Stadium on Saturday.

The Hammers, missing injured striker Andy Carroll, may consider themselves hard done by not to take all three points in front of their fans, having had one goal disallowed and a penalty claim dismissed, while there was also a contentious element to Nacer Chadli's early opener for the Baggies.

West Ham overcame the disappointment of what must have appeared to be repeated misfortune to equalise soon after the hour-mark through Sofiane Feghouli.

After a sustained period of pressure, Manuel Lanzini struck to make it 2-1 in fine style with four minutes of regulation time to go, running at the West Brom defence before unleashing a long-range strike that Ben Foster was powerless to keep out.

But West Brom were not to be denied, Evans climbing highest at the back post to head a corner beyond Darren Randolph and snatch a point, prompting a furious reaction from Slaven Bilic that saw the West Ham manager follow his assistant in being sent off by referee Michael Oliver.

The result means West Brom remain eighth in the table, five points ahead of West Ham, who drop to 10th spot.

In a sign of things to come, there was controversy in the air as early as the sixth minute in east London, when West Brom took the lead. Feghouli expected to be awarded a foul as he was bundled over by Chris Brunt, but Oliver ignored those appeals.

James Morrison seized on a subsequent moment of hesitation from the Hammers backline to slip in Chadli, who beat Cheikhou Kouyate with a nutmeg before also stroking the ball between the legs of goalkeeper Randolph.

5 - Nacer Chadli has had a hand in five goals in his two Premier League games v West Ham this season (3 goals, 2 assists). Hammered.February 11, 2017

West Ham thought they had equalised in the 16th minute, Feghouli steering home Lanzini's shot after Foster had felled his own defender Craig Dawson in the process of spilling a Robert Snodgrass free-kick.

It was unclear if Oliver disallowed the goal for offside or a foul, Michail Antonio clattering the keeper from behind, but regardless of the reasons for the decision, incensed Hammers assistant coach Nikola Jurcevic was sent to the stands after venturing the length of the touchline to remonstrate with the linesman.

Perhaps seeking to vent their frustration, West Ham created good chances for Feghouli and Antonio, although the visitors had earlier hit the bar through Salomon Rondon and continued to carry plenty of threat.

Snodgrass went down looking for a penalty under pressure from Jake Livermore in first-half injury time but yet again Oliver ignored his protests, an enraged Bilic waiting in the mouth of the tunnel to confront the referee after experiencing 45 minutes of intense frustration, much to the delight of his opposite number Pulis.

After replacing Aaron Cresswell with Jonathan Calleri at half-time and switching to three at the back, Bilic saw his players continue to dominate early in the second half and they were rewarded in the 63rd minute.

Lanzini's fierce strike was tipped onto the bar by Foster, but Feghouli got to the rebound first to guide home the equaliser.

West Ham pushed hard in search of a winner, Dawson called on to deny Lanzini and McAuley blocking a Calleri attempt.

They celebrated Lanzini's spectacular strike as if it would prove decisive, but Evans and Pulis had other ideas, the former Manchester United defender crashing home an uncompromising leveller in the 94th minute.