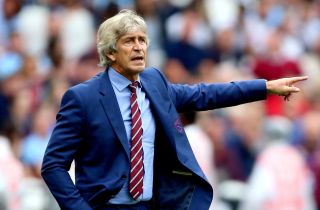 West Ham manager Manuel Pellegrini feels his side will be ready to stand up to Sheffield United’s “totally English football” at the London Stadium.

The Irons are looking to respond after resuming Premier League action with a lacklustre 2-0 defeat at Everton.

The Blades, meanwhile, head to east London on the back of a hard-earned 1-0 home win over Arsenal on Monday night.

Chris Wilder’s side have continued their momentum following promotion as runners-up in the Sky Bet Championship last season to push on into mid-table.

Sheffield United have already caused plenty of problems with their no-nonsense approach to top-flight football, which saw them battle to a 2-2 draw at Chelsea and then test Liverpool before the international break.

Pellegrini feels Wilder should take credit for the way the Blades have gone about their business so far in the Premier League.

“I think that Sheffield United have a clear style of play. It’s not just a lucky moment for them, they’re a consistent team that plays always in the same way,” the West Ham manager said.

“The four games that they’ve played away, they’ve lost not one of them; they’re a very difficult team to play against and we need to play well.

“Sheffield United reflect their manager’s mentality. It is totally English football, with strong players who work a lot during 95 minutes, with a lot of balls inside the box aiming to win the first or the second ball.

“They know perfectly how to do it. They play a typical style – direct football. It has come from the Championship but we are prepared for it.”

Pellegrini added: “When they have a clear style of play, when they work during the week the same way they play during their games in the Premier League, probably they will be a consistent and solid team the whole season.”

West Ham responded from losing their opening Premier League game 5-0 at home to Manchester City with a decent run of form.

However, the Irons had tailed off heading into the international break, their last victory coming against Manchester United on September 22.

After also being beaten at London Stadium by Crystal Palace, Pellegrini knows his side cannot afford another below-par performance in Stratford.

“If you want to have a success, you must not lose too many points at home,” the West Ham manager said at a press conference.

“You must win away too but here at home, we have lost at home two games already and that is too much.”