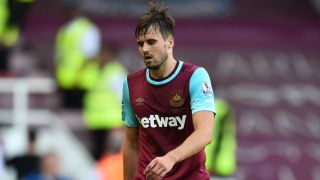 The full-back, who is spending the 2015-16 campaign with the Gunners' London rivals, was hurt during the challenge on Sergio Aguero which led to Manchester City's penalty in the 2-2 Premier League draw between the teams at Upton Park on Saturday.

Initial reports suggested Jenkinson could be out for the rest of the season but neither West Ham nor Arsenal have placed a time frame on the 23-year-old's expected absence as he awaits further assessment this week.

"Unfortunately, it appears that Carl has suffered a significant injury and he will be assessed by a specialist in central London on Wednesday.

"A further update will be provided when the full extent of the injury has been confirmed."

Arsenal added: "The thoughts and best wishes from everyone at Arsenal are with Carl, and we all wish him a successful recovery."

Jenkinson has made 23 appearances for West Ham in all competitions so far this season.