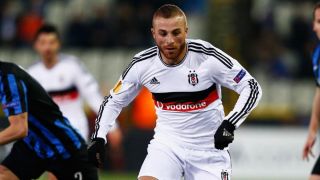 West Ham have completed the signing of winger Gokhan Tore from Besiktas on a one-year loan deal.

Both clubs have confirmed the transfer, with the Premier League side holding an option to make the move for the 24-year-old a permanent one.

He played 24 games in the Super Lig last season as Besiktas won the title by five points.

"Tore has been one of the star performers at Besiktas. Tore will add width, pace and trickery and is relishing the chance to showcase his talents in the Premier League."

West Ham said Tore would begin his pre-season training at their training ground while the rest of the squad concluded their tour of the United States.

Tore told the club's website: "I am very happy to be at West Ham. I watched many games that they played last season and saw how passionate the fans are. That made me want to come here and I am looking forward to playing in front of them.

"Slaven was also a big factor in me coming here and he is a great manager.  He is the main man and knows me very well. I could not have said no to him.

"He is the best manager I have worked under and he is like a father to the players. You feel like you are family."

Tore had a spell in the youth system of West Ham's London rivals Chelsea earlier in his career.

His arrival adds to the signings of Sofiane Feghouli, Toni Martinez and Havard Nordtveit ahead of the 2016-17 season.