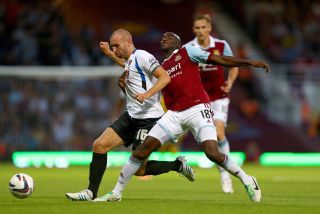 The 32-year-old France international was substituted after 33 minutes in the second-round clash on Tuesday, and scans have revealed the damage to be worse than originally feared.

Diarra faces a reconstruction of his anterior cruciate ligament and manager Sam Allardyce admitted it was unlikely he would feature again in 2013-14.

"Our team news is that only Alou Diarra, who unfortunately got injured the other night, is not involved in the squad," Allardyce said ahead of West Ham's Premier League meeting with Stoke City on Saturday.

"The injury is more serious than we expected and it's an ACL reconstruction it looks like, so that will almost certainly finish Alou's season.

"It's a big blow to us in squad terms, he was hoping to force his way into the side this season but obviously after that injury that now won't be the case."

Midfielder Diarra still has two years left of the three-year contract he signed in 2012.