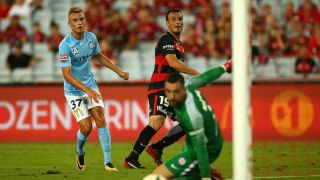 Western Sydney Wanderers came from behind to secure a 2-1 win over Melbourne City and boost under-fire manager Josep Gombau.

The Wanderers went down to heavy losses last month at home to Sydney FC and away to Newcastle Jets and would have been fearing the worst in the 25th minute, when Ross McCormack smuggled home Nathaniel Atkinson's low cross at the back post.

But City's advantage only lasted five minutes, with Oriol Riera collecting Raul Llorente's ball into the box from the left and finishing smartly on the turn across goalkeeper Dean Bouzanis.

And the hosts were in front a shade over a minute later as Riera flicked a pass into Mark Bridge's path and his fellow forward slotted home.

Two goals in sixty seconds have turned on its head! Live on Fox Sports Football​ 501 January 1, 2018

McCormack's outing took a turn for the worse when Vedran Janjetovic saved his 39th-minute penalty following a foul by Robert Cornthwaite on Scott Jamieson.

A third straight defeat for City after their Melbourne derby reverse leaves them fourth in the standings – behind neighbours Victory on goal difference – while Western Sydney are up to seventh.