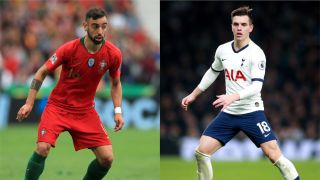 The January transfer window has seen a number of comings and goings at Premier League clubs, but how much of an impact will those moves have on the Fantasy Premier League?

From a midfield phenomenon arriving at United to a change of scenery for a struggling Premier League forward, these are the transfers that could reshape the FPL landscape.

It is a lot to suggest that the arrival of Bruno Fernandes at Manchester United could fix all of the club’s problems, but the Portuguese could certainly reinvigorate the forward line.

In the 25-year-old, Manchester United have added a central attacking player who has a proven track record of scoring goals and providing assists, two of the FPL’s most valued attributes.

With 20 of the former and 13 of the latter in the Portuguese top tier last season, he has the ability to rival Kevin De Bruyne for influence – but what effect might he have on other players?

Before his arrival at Old Trafford, no player at United was owned by more than 15 per cent of FPL bosses – Manchester City have three and Liverpool have six.

But that could all change too, with Anthony Martial and new signing Odion Ighalo two of the players who could benefit from Fernandes’ contributions from the centre.

Martial has done his best to lead Ole Gunnar Solskjaer’s forward line alongside the currently-injured Marcus Rashford, notching eight league goals, while Ighalo will be keen to show he can contribute immediately.

It might be that Fernandes struggles to bring his form to the Premier League right away, but if he does, United’s forwards could quickly curry favour with FPL bosses once more.

All change at Tottenham

Remarkably, no Tottenham player is owned by more than 10 per cent of FPL managers, a figure that represents the uncertainty and transformation at the club.

And developments in January could muddy the waters even further for those hoping to invest in Jose Mourinho’s side.

Bergwijn, 22, who plays largely on the left, registered double figures in terms of assists in each of the past two Eredivisie seasons, and had already reached 10 in 2019-20 before his move to north London.

Lo Celso, 23, meanwhile, scored just his second goal for Spurs recently in the FA Cup against Middlesbrough before being given 90 minutes in the 1-1 fourth-round draw against Southampton.

Both players will be competing for central and wide positions that are already hotly contested by the likes of Son Heung-min, Dele Alli, Erik Lamela, Tanguy Ndombele, Lucas Moura and Harry Winks.

FPL managers might have to wait even longer for the dust to settle to find out what Jose’s first-choice team looks like.

Not all moves are Premier League arrivals or departures however – for some, a change of scenery within the league offers the promise of rejuvenation.

That’s exactly what Cenk Tosun will be hoping, having departed Everton for Crystal Palace, where he has already found the net in a 2-2 draw against champions Manchester City.

The 28-year-old could represent quite the bargain if his revival gathers speed – at just £5.7m and 0.3 per cent ownership, his goals would come cheap.

Elsewhere Rose’s move to Newcastle may bring the England full-back more minutes and offer the Magpies a creative outlet on the left.

Rose notched 25 FPL assists over the previous six seasons at more than four per campaign, while Newcastle face only Arsenal from last year’s top six in their next nine games – the perfect run for Rose to make a case for his FPL selection?

Meanwhile, Danny Drinkwater is a name many FPL managers will not have considered for their side in quite a while, but could the Englishman’s move to Aston Villa change that?

After getting almost no playing time having moved to Chelsea from Leicester, before an unproductive loan spell at Burnley, it’s easy to forget Drinkwater contributed three goals and eight FPL assists during the Foxes’ 2015-16 title-winning campaign.

Villa have kept themselves clear of the clutches of the relegation zone with him in the team, losing one, drawing one and winning one since his arrival – might he offer attacking returns once again?