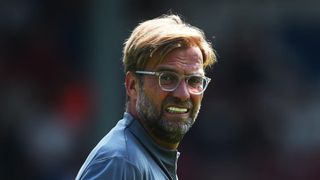 Jurgen Klopp insists his 2016 comments criticising the eagerness to splash the cash in modern football are still true despite his own lavish spending in recent times at Liverpool.

When Manchester United signed Paul Pogba in 2016, Klopp was critical and adamant he would "even do it differently if I could spend that money".

But since then, Liverpool have made Virgil van Dijk and Alisson the most expensive defender and goalkeeper of all time, while the club have also spent more than £40million each on Mohamed Salah, Naby Keita and Fabinho.

And following the signing of Alisson on Thursday, Klopp's 2016 quotes resurfaced and were put to him in a news conference, drawing a fiery response.

"That's a problem, whatever b******t you say, no one will forget it," Klopp told reporters on Saturday.

There are four new faces in the squad this summer, but what will , , and Naby Keita bring to the Reds?Jürgen Klopp gave his verdict in Charlotte tonight: July 21, 2018

"It's still kind of true. I couldn't have imagined the world could have changed. £100m [for Pogba] was a crazy number, but since then the world changed.

"We signed the most expensive goalkeeper, there will be a few nice transfers [made by other clubs]. It's not about pushing through my thoughts on that and not paying big money, if Liverpool aren't successful we have to work.

"To improve a squad like this costs money. So far it's a really good year for us, pretty successful last year.

"Still we need to replace players - Emre Can left, good business bringing Fabinho in. [Xherdan] Shaqiri, we saw him play in the World Cup. I know Stoke were relegated, but he had a lot of good games.