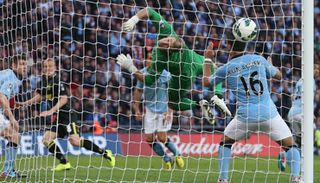 The winning goal, headed home on the stroke of full-time by substitute Ben Watson, gave the underdogs a thoroughly deserved victory in one of the most memorable finals for years.

Wigan, still threatened with relegation from the Premier League, played better throughout and thoroughly deserved to win against a largely listless City side who had defender Pablo Zabaleta sent off for a second yellow card in the 84th minute.

He became only the third player red-carded in the 142-year history of the competition following Kevin Moran of Manchester United in 1985 and Jose Antonio Reyes of Arsenal in 2005.

His first yellow came in the 60th minute for a clumsy challenge on the outstanding Callum McManaman and the second followed a late, sliding challenge on the same player leaving referee Andre Marriner with no option but to dismiss him.

It was Wigan's first FA Cup final since they were formed in 1932 and they became the 42nd winners of the trophy when Watson, who had only been on the field for nine minutes and had broken his leg earlier this season, powered an unstoppable header past goalkeeper Joe Hart from a Shaun Maloney corner.

Wigan's win was the biggest upset since Wimbledon beat Liverpool to become the last first-time winners in 1988 and represented a personal triumph for chairman Dave Whelan who broke his leg playing for Blackburn Rovers in the 1960 final.

"We didn't win by luck - it was no accident, we won it by hard work and we deserved it, from start to finish it was an incredible performance," Wigan manager Roberto Martinez told reporters.

"It is a shame the final is not the final game of the season because we still have two matches to play to stay up but it is such a such a special tournament, and everyone deserves to feel proud today."

An emotional Whelan added: "Its absolutely fantastic. I was not sure we could win this but then I had a dream and didn't want to tell anyone. I thought we would get to the final and win 1-0 and it is repayment for me breaking my leg in 1960."

Wigan now face two vital Premier League matches at Arsenal and home to Aston Villa to save themselves from relegation, but will become the first team to win the FA Cup and go down in the same season if they fail to stay up.

Five clubs, including Manchester City in 1926, got to the final and were relegated in the same season and all lost.

"We've got two big games to come and we wanted to conserve energy. But how we are going to cope on Tuesday against Arsenal after the physical and emotional drains on us today, I just don't know," Martinez told reporters.

"Everyone wrote us off before the game, but we were following a dream. You cannot describe the feeling at the moment. My players faced adversity and played with a smile. I am so proud of them."

City manager Roberto Mancini, showing an unusual nervousness in his news conference, was repeatedly asked about speculation linking Manuel Pellegrini of Malaga with his job and whether the Italian thought he was about to get sacked.

"You have been t