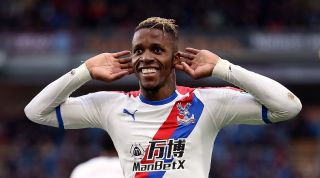 Arsenal want to sign Wilfried Zaha but will need Crystal Palace to dramatically lower their asking price to get a deal over the line.

According to The Sun, Unai Emery has identified the winger as one of his leading transfer targets this summer.

Zaha has told Palace that he wants to join a Champions League club after another stellar season at Selhurst Park.

And Arsenal, who will qualify for Europe's premier competition if they beat Chelsea in the Europa League final, are keen to add the Ivory Coast international to their squad ahead of the 2019/20 campaign.

However, the Gunners are only willing to spend £40m on Zaha - which is significantly less than the Eagles' £80m asking price.

The 26-year-old is contracted at Palace until 2023 and the south Londoners will not let him go on the cheap.