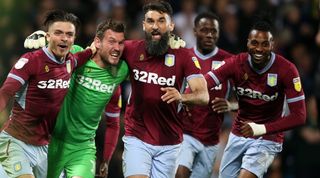 On February 16, Aston Villa lost 2-0 at home to West Brom. Their season looked over (full disclosure: I wrote as much), and a fourth consecutive season in the Football League secured. Villa were nine points off the top six, having played two games more. They had conceded more home league goals than any other club in England’s top five leagues.

Very few supporters believed that Villa would embark upon such an astonishing run of form (12 undefeated league games, including a club record 10 straight wins), but most did believe that Dean Smith deserved some patience. He was a lifelong fan, had been welcomed far more than ‘big name’ candidate Thierry Henry, and Villa had tried pretty much every other option: leftfield foreigner (Remi Garde), enthusiasm and “pashun” (Tim Sherwood), continental coach (Roberto Di Matteo) and Mr Dependable (Steve Bruce).

That patience has been rewarded quicker than anyone thought possible. And here are four reasons why...

There are individuals who deserve particular credit for turning around Villa’s form (and more on them next), but speak to Smith and he'll tell you that there was a very simple change: harder work.

“Last Sunday we had a small-sided game with players going nose-to-nose, such is the competitiveness,” he said in late-April. “It's probably the environment we have created here. We want to see winners and losers out on the training ground as well as on a Saturday. It makes for a healthy environment. The lads are enjoying that.”

There is no suggestion that Villa’s players weren’t enjoying training sessions under Bruce, but there is a hunger and intensity to performances under Smith that can only be explained by an improvement on the training ground – which in turn has forged greater competition for places in the squad. Players should be desperate to be part of the starting XI and gutted to be on the bench, not happy to hide in the shadows.

Smith had very little choice but to bring Lovre Kalinic straight into the team. There was Premier League interest in the Croatia international, but Villa eventually won the race and paid £7m for a goalkeeper who joined Orjan Nyland, Mark Bunn and Jed Steer. When a second-tier club pays that much for a player, he must start.

THE HANGOVER Coming to terms with Leeds United's play-off heartbreak

The problem is that Kalinic was pretty wretched. He played eight matches after joining, of which Villa won one. The goalkeeper conceded 15 goals, rarely commanded his defence effectively and looked nowhere near value for money. Smith brought Jed Steer into the team, and that coincided exactly with their unbeaten run. The third-choice goalkeeper, loaned out to Charlton in League One, had become a hero. That status was secured in the penalty shootout victory over West Brom.

"That's football," Steer reflected after the play-off semi-final. "It's ups and downs and thankfully I got a load of games in down at Charlton which gave me the chance to play here. I'm thankful for the opportunity, and to think there's a chance I could be playing at Wembley is something I really want to do. I'll be working hard in training in the next couple of weeks to make sure I get the nod."

Steer deserves huge credit for stepping up when it mattered, but so too does Smith. It’s a bold call to drop an expensive signing in such a critical position after just eight games, and one that reflects badly on the manager if it goes wrong. Smith went with his hunch, and has been proved spectacularly right.

Mings could only get better

Tyrone Mings always had the potential to be an excellent and composed defender, but he had lost his way at Bournemouth after serious injury. He’d played only 17 league games in three-and-a-half years under Eddie Howe thanks to a serious knee injury and persistent back problems. A loan to a top-half Championship club promising regular football made sense.

"It's been everything I could have wished for and more," Mings told Sky Sports in March. "We've hit form at the right time, momentum is key going into the play-offs. Anybody we face I think we'll have a real good chance against.”

He’s not wrong, but Mings shouldn’t overlook his own role in that improvement. Some supporters were sceptical when Smith revealed that he wanted to play Mings in central defence rather than at left-back over Neil Taylor, but he’s been the rock upon which Villa’s new-found defensive resilience has been built.

The return of Grealish

For all the impact of Mings and Steer in defence, it was Jack Grealish’s recovery from injury that truly allowed Aston Villa to fire. Of the last 16 regular season Championship matches that Grealish has started, Villa have won 13, drawn three and lost none. It’s hardly controversial to label him the most talented player in the division, or to suggest that had he been fit all season, Villa would probably have achieved automatic promotion. In the 13 games he missed between December and March, they took 13 points.

You don’t have to dig deep to see Grealish’s impact. Despite starting only 33 of a possible 48 matches, the 23-year-old is Villa’s top chance creator, their second-highest dribbler (three behind John McGinn in 800 fewer minutes) and has completed the most passes of any attacking player.

But more than that, Grealish scares opposition teams and managers. He is often double-marked, creating space and time for his team-mates, but has the technique to retain possession and strength of character to deal with the overly physical treatment that too often comes his way.

"Jack has always been like that, he is a player who likes to take responsibility," Villa favourite Stilian Petrov told talkSPORT last month. "He likes to take people on. He creates space for everyone else and he's an exceptional talent.

"With Jack in the team, Villa look completely different. But you can see in the last couple of games that everybody has been scoring goals from all over the team. Defenders, midfielders and strikers. That’s because of him.”