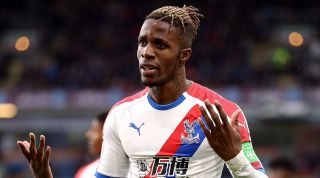 The Crystal Palace winger has spoken publicly of his desire to seal a move away from Selhurst Park this summer.

Tottenham and Chelsea have also been linked - although the latter's transfer policy is complicated by a two-window ban - but Emery is desperate to bring the forward to the Emirates Stadium.

However, the Gunners boss must first persuade the club's board to increase his transfer budget, which currently stands at just £45m.

Palace are expected to demand at least £55m in exchange for their star player.

And if the Arsenal hierarchy are unwilling to loosen the purse strings, Emery will need to sell some of the fringe members of his squad in order to generate extra cash to fund a move for Zaha.