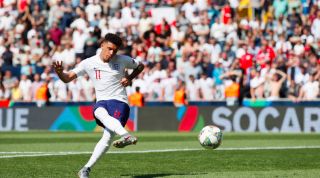 “There are two sides to the decision and if one side doesn’t want it, it doesn’t want it,” said Guardiola in August 2017. City starlet Jadon Sancho had just joined Borussia Dortmund for around £8million and the Catalan coach wanted to explain why he hadn’t been able to keep the highly-rated youngster.

“We arrived at an agreement with Sancho, we shake our hands [on a deal], so we offered him a huge deal in terms of the salary. Even after when they say ‘No’, we met the father and the managers, and the other managers, and with him, but if the player says ‘No, no, no, no, no’, what can we do?”

As Guardiola says, there are two sides to every story. Sancho moved to Germany, and Dortmund in particular, to play senior football. Two years later, he is a regular for both his country and in one of Europe’s top clubs, was voted into the Bundesliga’s team of the season – scoring 12 goals and providing a league-high 18 assists – and is now the continent’s most coveted teenager. By way of contrast, Phil Foden – City academy’s other great white hope – has completed 90 minutes at club level eight times, even if the Stockport Iniesta did win a domestic treble last season.

When FFT met Sancho at the turn of the year at Borussia Dortmund’s winter training camp in Marbella, southern Spain, the player in front of us couldn’t have been further removed from the image Guardiola painted two-and-half years previously. If there’s a more mature, independent and switched-on 19-year-old on the planet, we’re yet to meet them.

He’s the sort of player who should appeal to Centrist Dads the country over, and those offended by Marcus Rasford and Jesse Lingard’s heinous holiday crime of enjoying themselves in a hotel. Not that that’s any kind of group to which Sancho should particularly aspire, admittedly.

OPINIONWhy don't footballers realise people will judge them by what they post on social media?

On his left forearm is a tattoo – nothing new there for a young footballer, you might think. You’re wrong. It’s a poem, written by Sancho himself, for his baby brother who died when the winger was five.

“You and me will stay together,” reads part of it. “I couldn’t wait till you grew up. Teach you football and win the cup. But you are gone what can I do? Baby brother, we love you.”

During our interview – he’s our youngest cover star since Lionel Messi in 2005 – he struggled to contain him emotions when talking about his departed sibling. “All I want is to do him proud. He’s my inspiration,” Sancho told us, his voice wavering slightly.

The 19-year-old was also quick to tell us about the debt he owes Dortmund. This summer, extensive column inches will be dedicated to Sancho’s next move, but there are fundamental flaws to each rumour.

The man most suited to coaching this most precocious of teenagers – a once-in-a-generation talent which English football so rarely produces – doubles as the least likely person to go anywhere near him. Guardiola offers players only one chance to come on board his project. Spurn that offer, or make a mistake, and he cuts you loose. He did it with Thiago Alcantara at Bayern Munich – if you ever read the Spaniard might be rejoining a Guardiola project, ignore it – and, more famously, Zlatan Ibrahimovic at Barcelona.

Earlier this year, Pep confirmed as much, saying: “Maybe in the future – new club, new managers – but I don’t know.” Effectively, not while I’m here.

Manchester United want him, but the club is a circus in desperate search for a ringmaster to restore order above Ole Gunnar Solskjaer. Liverpool don’t really need him. Chelsea – who Sancho supported as a kid, idolising Frank Lampard – are under a transfer embargo. Spurs would have to set fire to their wage structure to buy him. Arsenal are now a step down.

Real Madrid have nearly completed all their business and Barcelona will look elsewhere. Bayern Munich have the money (and form, when it comes to half-inching Dortmund’s best players) but seem determined to pursue other avenues, principally Gareth Bale. Italy, meanwhile, increasingly resembles football’s retirement home.

The best place, then, for Sancho is exactly where he is. And he knows it. He feels a sense of attachment to the club who bet £8m on a 17-year-old who was yet to make a senior first-team appearance. He revels in being the poster boy of a new generation increasingly willing to play abroad and absorb new tactics, experiences and culture.

With Bayern in something of a state of flux, Mats Hummels returning to provide an experienced hand and coach Lucien Favre signing a contract extension, Sancho’s future is bright. And, for now at least, yellow and black.

While you're here, why not take advantage of our brilliant subscribers' offer? Get five issues of the world's greatest football magazine for £5 – the game's greatest stories and finest journalism direct to your door for less than a pint in London. Cheers

QUIZ Can you name the 25 most valuable players in the world aged 21 and under?