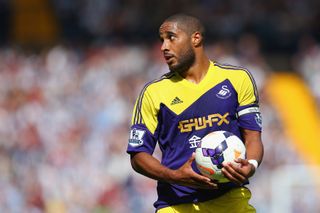 The Wales international has not played for Michael Laudrup's side since they beat Crystal Palace last month, but it was hoped he would be ready for his comeback on Thursday.

Williams has been unable to train properly since picking up the injury and Laudrup revealed he has no plans to rush him back into first-team action – especially given the form of his replacement Jordi Amat.

"He's still in some pain when he does certain movements," he said. "I already said a couple of weeks ago (that) we  are not going to rush it.

"Jordi has confirmed what I already knew and what I expected from him.

"I'm pleased with what I've seen."

Swansea have a 100 per cent record in Group A, keeping two clean sheets in their two victories, and Laudrup believes they can extend that run against a side who have yet to even score in the competition.

"We play at home, we'll be favourites and we want to win," he added. "If we do, we'll have nine points and one foot in the knockout phase.

"So in that sense, (this) is a key game for us because we want to finish top of the group to give us the best chance going into the next stage."