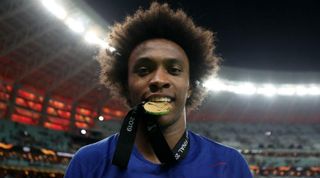 Willian is keen to sign a new contract at Chelsea and wants to win the Champions League at Stamford Bridge.

The Brazil international's current deal expires next June, but he is determined to extend his stay in west London.

However, the winger has admitted that he has not yet held talks with the club over his future.

"From my side, I want to stay," Willian told the Evening Standard. "I have one year left and I want to stay because I like to play for Chelsea. I love this club, I love to live in London and my family loves it here. I've been here six years already so everything is perfect for me.

"Of course [there is more I want to do at Chelsea] – in the Champions League! I want to win more titles here, I want to play more games, to score more goals so everything that I can do, I will try hard to do."

Willian made his first start of the season in Saturday's 5-2 victory over Wolves, which moved Chelsea up to sixth in the Premier League table.

Frank Lampard's side are unbeaten since the opening weekend and Willian says he has enjoyed being reunited with his former team-mate.

"Is it a change of culture? I hope so, because I have been here six years [and] I've already had five managers. I hope he can stay here a long, long time."

Chelsea begin their Champions League campaign with a home game against Valencia on Tuesday.