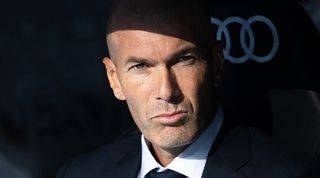 The Champions League group stage returns for 2019/20 next week, as approximately 300* of the 32 teams involved go in with realistic ambitions of lifting the trophy.

Last year’s winners Liverpool, who defeated Premier League rivals Tottenham in June's final, will be aiming to defend their crown and win the competition for the seventh time in their history. Pep Guardiola’s Manchester City have the most expectation upon them having not reached the semi-finals since 2015/16, but they'll be up against European royalty in Barcelona, Real Madrid, Bayern Munich and Paris Saint-Germain – all of whom have their own motivations for redemption.

*Rounded up, quite a lot.

50 up for Real Madrid

This year’s edition of the Champions League will be special for Euro-hogs Real Madrid, who will be participating in their 50th season in Europe’s premier competition – more than any other side in the tournament’s history.

The La Liga giants also hold the record for the most Champions League wins, having lifted the trophy 13 times. Helpfully, Los Blancos won the first five editions of the tournament between 1955 and 1960, and more recently scooped successive titles in the 2015/16, 2016/17 and 2017/18 seasons under club legend Zinedine Zidane.

Madrid kick off their historic campaign with a difficult trip to PSG, having also been drawn in Group A with Belgium’s Club Brugge and Galatasaray of Turkey. But...

The Madrid manager is himself seeking a record in this season’s Champions League. No manager has ever won Europe’s premier club competition four times; the Frenchman is currently tied with Bob Paisley, and former Milan and current Napoli boss Carlo Ancelotti, on three.

Furthermore, Zidane still holds a remarkable record of never being eliminated in the Champions League as Real Madrid manager.

The Liga giants were knocked out by Ajax last season in the last 16, but were being managed by Santiago Solari (via Julen Lopetegui) following Zidane’s shock resignation in the summer of 2018. The Frenchman was reinstated days after the shock defeat.

The Barcelona icon has scored 112 goals in 15 Champions League seasons, and won the competition four times. Nobody would bet against him building on that total when Barça take on Borussia Dortmund, Inter and Slavia Prague in a tough-looking Group F.

But perhaps his weakness lies within. Messi has never scored against Inter, and the Serie A club are one of five Champions League sides that Messi has faced without fruition (Atletico have denied him four times; Rubin Kazan two; Benfica and Udinese survived one apiece). The 32-year-old has lined-up against the Nerazzurri on three occasions in European competition without getting his name on the scoresheet – and Barça have only won one of those.

Messi will be hoping to change that record when Inter visit the Camp Nou on October 2, while Barcelona visit San Siro for matchday six on December 10.

Away tickets in the Champions League were getting daft, so UEFA have now capped all prices at €70 – still not ideal – for visiting supporters.

Last season, Barcelona charged over £100 a ticket for Liverpool and Manchester United fans for their Champions League knockout ties, and extortionate prices have led to complaints from several fan groups across Europe over the past few seasons. UEFA have stepped in to help, and have also capped Europa League ticket prices at €45 for the forthcoming campaign. Well, it's a start.

Barcelona's home is regarded as a difficult place to visit, but the numbers prove the extent of it. The Catalan side are currently on a 32-game unbeaten run at home in the Champions League, having not been bettered since Bayern Munich thrashed them 3-0 in the 2012/13 semi-finals – over six years ago.

Twenty-four different teams have come to the Camp Nou and been unable to claim a win at the 99,000-seater stadium. The record for the longest unbeaten home run in Champions League history is held by Bayern, who didn't suffer home defeat for 43 consecutive games between 1969 and 1991.

Messi or Ronaldo? It’s the boring, unanswerable question which has dominated football for a decade. Ballon d’Ors have been shared between them, Champions League titles too, while football's longstanding records have tumbled before them both.

This year’s Champions League could offer them another – but also Madrid's Karim Benzema. Should each of them score in Europe this season, they will surpass the record they currently share with former Real Madrid forward Raul for scoring in consecutive Champions League seasons (14 as things stand).

Netting in this year’s tournament will also take them one step closer to the record for scoring in the most Champions League seasons, currently held by former Manchester United winger Ryan Giggs (16).

Dutch giants Ajax dazzled fans across Europe as they reached the Champions League semi-finals last season, but they didn't qualify for this year's edition automatically thanks to the Eredivisie's poor UEFA coefficient. As a result, they're already four games into their campaign.

The four-time winners – and last season's Eredivisie champions – joined in the third qualifying round, and had to defeat PAOK and APOEL in August to gain qualification for the group stage proper.

Away woes for Luis

Luis Suarez loves playing in the Champions League for Barcelona. Not only did he lift the top European prize back in 2015, he also has a fine goalscoring record in the competition with 20 in 48 games for the Catalan giants.

Yet the Uruguayan forward is currently in the midst of a long and unwanted Champions League goal drought away from home. Indeed, Suarez’s last European strike away from the Camp Nou came on matchday one of the 2015/16 Champions League campaign, in a 1-1 draw with Roma.

Since then, the former Liverpool striker has played over 1,691 minutes of away football in the Champions League without scoring. The 32-year-old will be hoping to obliterate this barren run when Barça visit Dortmund on September 17, and end 1,463 days of away troubles in Europe.

Atalanta upset the odds last season to reach the group stage for the first time in their 111-year history. The Serie A club had spent the previous two seasons in the Europa League, but finished third ahead of Roma, Milan and Inter in 2018/19 to reach the Champions League proper.

Atalanta’s surprise feat comes at a cost, though: their 21,300-capacity stadium doesn't comply with UEFA regulations and is currently undergoing renovation, so the Italian side will be playing their home matches at the iconic San Siro. Both curvas will be shut, however, dropping the maximum capacity from 80,000 to roughly 43,000.

Milan themselves didn't qualify for the Champions League and were barred from the Europa League for failing Financial Fair Play.

QUIZ Can you name every country Cristiano Ronaldo has scored against?