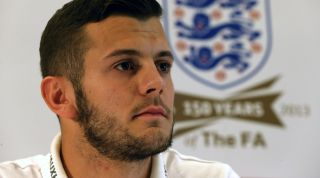 The 18-year-old was born and raised in Belgium until the age of 16, but can also play for Albania, Turkey and Serbia through heritage and would be eligible to play for England by 2018 through residency.

Speaking ahead of Friday's crucial World Cup qualifier against Montenegro, Wilshere urged the Football Association not to follow the same path as the England cricket team, which features several South African-born players.

"The only people who should play for England are English people.

"If you live in England for five years, it doesn't make you English. You shouldn't play.

"It doesn't mean you can play for a country. If I went to Spain and lived there for five years, I am not going to play for Spain.

"We have to remember what we are. We are English and we tackle hard and we are tough on the pitch and we are hard to beat. We have great characters.

Former England star John Barnes, who was born in Jamaica but played 79 times for England, understandably disagrees with Wilshere's views.

"In 1983, when I played for England, Jamaica never had a chance of qualifying for the World Cup - they weren't that interested in football yet," Barnes said.

"I don't know about Albania or Kosovo, but it's a question of if he was French, would he choose England over France?

"But if he decides he (Januzaj) wants to play for England, then I don't see why not."

But Wilshere, 21, also believes it's preferable to have an England-born manager coaching the national team but concedes he is indebted to former England boss Fabio Capello.

"I think it’s better if there is an Englishman, but don't get me wrong, Capello did a lot for my England career," he said.

"He gave me my debut and stuck with me from a young age so he was a good manager."