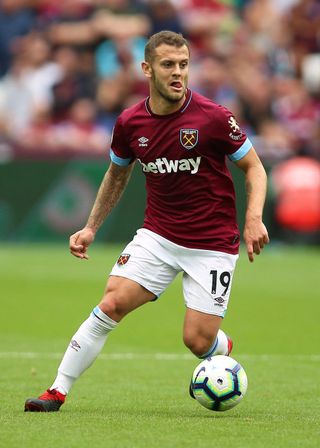 Jack Wilshere is eager to make up for lost time after his first season at West Ham was ruined by injury.

The England midfielder made just eight appearances for the Hammers last term due to ankle problems.

They were merely the latest of a number of injury setbacks throughout the 27-year-old’s career but he now hopes to put those frustrations behind him.

The former Arsenal player said: “I just want to play as much as I can. Last year was tough for me but injuries can happen any time.

“I’m just taking each day as it comes, working hard in training and then (hoping to) prove myself in games. I want to play a big part this season and play as much as I can.

“I don’t need to tell you frustrating it was. I was in the team, I wanted a new challenge and I wanted to play.

“I was really happy with the way I was playing, I started well, but then picked up my injuries.

“It was devastating but I put that behind me and came back at the end of the season. I missed being around the team and travelling with the boys.

“But I have had a good couple of weeks now, I am ready to go and be involved. I just want to push on now.”

Wilshere was speaking at a press conference in Shanghai, where the Hammers are involved in the Premier League Asia Trophy.

They play Newcastle in the third-place play-off on Saturday after losing 4-1 to Manchester City in Nanjing on Wednesday.

Wilshere said: “It’s important to have a full pre-season. I enjoy pre-season and playing games. I know how important it is for my sharpness.

“You can train as much as you like, but there is no substitute for playing games and I want to play as many games as I can.”

Despite his hard work over the summer, Wilshere accepts he faces competition to win a place back in the team.

He said: “There is a lot of quality in this team, especially in the midfield area, so it’s down to us as individuals to show the manager in training and in games that we should be playing.

“It’s a long season, though, so I am sure we will all have opportunities to prove ourselves.”