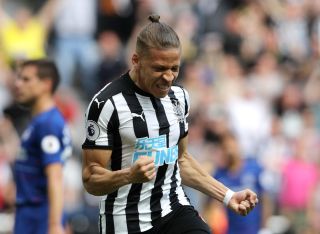 Steve Bruce could be ready to turn to a man Newcastle tried to sell this summer as he looks solve his team’s goal-shyness.

Dwight Gayle, who scored 24 goals on loan at Sky Bet Championship West Brom last season, made his first appearance of the new campaign as a late substitute at Chelsea last weekend after finally overcoming a niggling calf problem.

But with the Magpies having managed only five goals in their nine Premier League fixtures to date despite spending a total of around £77million on Miguel Almiron, Joelinton and Allan Saint-Maximin since January, Gayle could have a role to play in Sunday’s home clash with Wolves.

He managed only six goals in 35 top-flight appearances for the club during the 2017-18 season having plundered 23 during their promotion campaign, but Bruce is convinced he can be a threat.

He said: “I always believe that if you’re a goalscorer, you’re a goalscorer. Yes, we know that the Premier League is a step up, but I saw him play twice for West Brom last season and he was electric. He was easily the best striker in the division.

“When you see him in training, he finishes naturally, so if you do create the opportunities, then I’m sure he will take them.

“But every goalscorer needs a bit of service, and that’s the difficult part of the game. We have to try to get that.”

Joelinton’s £40million arrival from Hoffenheim this summer looked to have paved the way for Gayle’s exit as a series of Championship sides, including the Baggies, Leeds and Stoke, as well as promoted Norwich, were linked with him.

However, no deal was ever struck and now the two are vying for a place in Bruce’s starting line-up.

The Brazilian, who turned 23 in August, has found the going tough so far with only one goal – a priceless winner at Tottenham – to his name, but his boss is confident there is much more to come from him.

Asked if Joelinton needed to be taken out of the firing line, the head coach said: “I don’t think he needs a rest just yet, he just needs time.

“We can still improve him. He’s only just turned 23. We knew there would be improvement and he can only get better.”