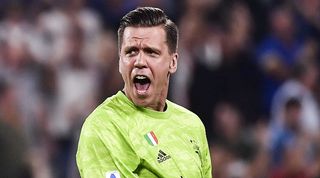 Wojciech Szczesny has joked that he is the greatest goalkeeper in history after displacing Gianluigi Buffon at Juventus.

The former Arsenal shot-stopper became Juve's undisputed No.1 in 2018/19, when Buffon joined PSG in search of more regular first-team football.

The 41-year-old veteran has since returned to Turin to serve as Szczesny's deputy after a single season at the Parc des Princes.

And the Poland international has joked that his seniority to the legendary Buffon now makes him the finest keeper of all time.

"Recently I said that when I was back-up at Roma, it was to the best goalkeeper in the world, Alisson, who's now at Liverpool. Now at Juve my substitute is one of the greatest players in history. The conclusions are that I'm probably the best in the world and in history," Szczesny told Przeglad Sportowy.

"Seriously, an extra year of learning from Gigi is an invaluable experience and I'm glad he's back. This is a good move for Juventus and for me - the possibility of training with him, talking, watching, sharing insights, can't be bought. I would have to be very stupid not to use it.

"I'm delighted. When I came to Juventus two years ago, I knew I would be his substitute for a year. Now he's returned aware of his role. Our relationship is still great."

Juventus beat Napoli 4-3 on Saturday to make it two wins from two at the start of the Serie A season.