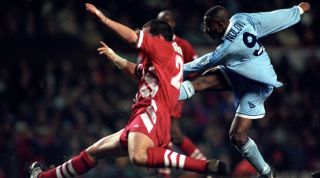 It’s been 25 years since Robbie Fowler scored the most iconic hat-trick in Premier League history. In front of a crowd already giddy from a healthy dose of August bank holiday sun, a 19-year-old lad from Toxteth sent Anfield delirious by scoring three marvellous goals in less time than it takes to make a strong brew.

Fowler’s goals earned him a place in footballing folklore, but for every story like this there are many more forgotten. Here are some of the most obscure members of this unfortunate treble club...

Growing tired of playing second fiddle at Newcastle to Les Ferdinand and Tino Asprilla, Kitson moved south in February 1997 – where he scored not one but two hat-tricks during an otherwise fairly unhappy five-year spell at West Ham.

The first of these came in a 5-1 victory against Sheffield Wednesday during the 1996/97 campaign, but Kitson also popped up with a trio of goals against Charlton Athletic five seasons later – a game that finished 4-4. Despite so much time elapsing between the two hat-tricks, Kitson had managed just 49 appearances over the period, scoring 10 goals.

The goals would be his last for the Hammers – and his only during the 2001/02 season.

Before he was banging in goals for Cray Village Paper Mills and appearing in FA Vase finals, Lisbie had a previous life at Charlton. He spent 11 years with the Addicks, with whom he entered the Premier League hat-trick club.

In September 2003, Liverpool visited The Valley and were stunned by Lisbie in a rampant mood. The Jamaica international only scored 14 goals during his entire Charlton career, but three of them came against a Reds team featuring the likes of Steven Gerrard, Michael Owen and Emile Heskey.

The last of them was a scorcher, with Lisbie running from his own half before slotting the ball past Jerzy Dudek from 20 yards out.

In an event dubbed “Tchoyi Story 3” by a hugely appreciative West Bromwich Albion fanbase, Tchyoi’s heroic hat-trick against Newcastle during the 2010/11 season rescued the Baggies a point in their 3-3 draw.

He was inconsistent during his entire spell at The Hawthorns after arriving from Red Bull Salzburg in the summer – but when he did get it right, the Cameroonian was unplayable.

He definitely got it right against the Magpies. Tchoyi’s goals were varied, too: the first was a poacher’s finish created by patiently waiting on the shoulder of Newcastle's defence; the second, a drop of the shoulder and a curled strike into the top corner; the third a diving header. He fell into obscurity soon after being released by West Brom in 2014 – forgetful spells at Augsburg and a host of Austrian sides made sure of that – but Baggies fans will never forget Tchoyi Story 3.

Dindane scored 10 goals in all competitions during his loan spell at Fratton Park in 2009/10, but three of them came in a hat-trick against Wigan in October.

That game represented the obvious high point of his career on the south coast, with the Ivorian dropped from Pompey's squad in February so that the club didn't trigger an obligatory £4m appearance payment to his parent club Lens.

Zimbabwe have the honour of producing two candidates for this list. Benjani, of Portsmouth and Manchester City fame, may now be more well-known to younger fans – but Ndlovu was more of a trailblazer and appeared was one of few foreigners in the Premier League's opening campaign.

Ndlovu’s moment(s) of glory came while playing for Coventry against Liverpool in the 1994/95 season. His first goal was a tap-in at the back post, and he doubled his tally from the penalty spot.

The pick of his goals was the third. Collecting the ball just inside the Liverpool half on a boggy Anfield pitch, the striker shimmied his way past the Reds’ defence before firing a shot in the bottom-right corner.

Statistically speaking, Naismith’s time at Everton was not spectacular. The Scotland international scored an underwhelming 26 goals in 123 games, while also contributing 12 assists. But he once scored three goals against the reigning Premier League champions.

In September 2015, the Scot put Jose Mourinho’s Chelsea to the sword, netting a perfect hat-trick as the Toffees breezed to a 3-1 victory. He created his first of that match via a clever interchange with Brendan Galloway, before continuing his run in the box and nodding home the left-back’s cross. The second was a rasping drive with his left foot, and Naismith completed the feat by smashing home at the near post with his right. Nicely done.

We need to talk about Harry Maguire's terrible record against Crystal Palace...

10 of football's most eventful (and amusing) debuts

Despite spending his five-year spell in England bouncing around a number of unfashionable clubs, Fjørtoft can still boast a Premier League hat trick.

During Swindon Town’s solitary season in the division, the Norwegian started slow but then burst into life with a treble against Coventry City. Playing in front of a capacity crowd of over 15,000 at the County Ground, Fjørtoft took advantage of some clumsy defending in scoring two penalties, having already converted on the rebound following a Steve Ogrizovic save.

Fjørtoft had endured a spell of 21 matches without a goal, and quite rightly lapped up the plaudits that came his way.

After Swindon’s relegation, he enjoyed mixed spells with Middlesbrough and Barnsley, sandwiched in between a memorable season at Sheffield United, where his goals came close to firing the Blades into the Premier League.

Fredi Bobic is a name that may be familiar to anyone who followed the Luka Jovic saga this summer. But before he was negotiating transfers as Eintracht Frankfurt’s sporting director, the former Germany international was keeping Bolton Wanderers in the Premier League with an unlikely hat-trick.

Brought in on loan from Borussia Dortmund, with the Trotters hovering just above the drop zone, the striker scored three against Ipswich Town in April 2002 to push Wanderers further towards survival.

Bobic opened the scoring after just two minutes in typical predatory fashion, latching onto the end of a wild shot, swivelling his hips and then calmly stroking the ball home. Thirty-six minutes later he'd scored two more, with Youri Djorkaeff the only other scorer in a famous 4-1 victory.

Gomez began his decisive game against Reading being booed by his own fans. By the final whistle, they weren't taunting him any more.

The first strike came from a rebound after Adam Federici spilled his initial shot, and a superb diving header produced goal No.2. Sean Morrison and Ali Al-Habsi's own goal meant the Royals had dragged the score level by stoppage time, but then came Gomez’s big moment: meeting Arouna Kone’s cross to smash home and complete a dramatic win.

He became only the second Spaniard (after Fernando Torres) to notch a Premier League treble, and later joined Sunderland. Much less memorably.