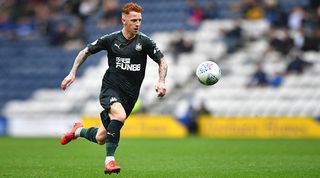 Rojo almost signed for Everton before the Premier League deadline, only to see his move scuppered by a United hierarchy that considered the Toffees as top-four rivals.

The Argentine was still hoping to leave before the European deadline – Fenerbahce were said to be keen – but Ole Gunnar Solskjaer confirmed last week that Rojo was going nowhere. Apparently he’s still part of plans, but it’s difficult to see how.

Funnily enough, those with Sunderland connections aren’t always welcome at St. James’ Park – even if they’re a boyhood Magpies fan. Perhaps the latter is why Colback was initially popular among the Newcastle faithful despite joining their arch rivals as a 10-year-old.

He was a regular in his first three seasons on Tyneside but has barely featured since 2016/17, when Newcastle were a Championship side. Rafael Benitez didn’t fancy him, but the 29-year-old remains a Magpie despite the fact that Steve Bruce seems to share the same opinion.

If you’re wondering who this is, don’t worry: Foulquier still hasn’t played in the Premier League for Watford, two years on from joining. The defender – signed from Granada, you may be less surprised to hear – has spent time on loan at Strasbourg (2017/18) and Getafe (2018/19), but no permanent move materialised.

Foulquier did at least play his first game for the Hornets in last week’s League Cup win against Coventry. The future is bright(er).

Riedewald was close to leaving Palace before the European window closed, but a proposed loan move to Bundesliga new boys Paderborn fell through.

The 2017 Frank de Boer signing has been a fringe player ever since Roy Hodgson took charge, and has moved even closer towards the fringes. He featured in the League Cup against Colchester, but Palace were knocked out on penalties and now chances will be hard to come by.

Niasse’s days at Everton have been numbered since Ronald Koeman effectively tried to bully him out of his squad in 2016/17, before embarrassingly having to recall the Senegalese (and then watch him bail the Toffees out). Niasse outlasted the Dutchman and has also seen off Sam Allardyce at Goodison Park.

The striker has been loaned to Hull and Cardiff (where he failed to score in 13 appearances during the second half of last season) during his time at Goodison, but high wages have made him tough to shift. He’s out of contract next summer.

Saivet as made just eight appearances since joining Newcastle in January 2016, and none since scoring with a free-kick against West Ham on December 23… 2017.

The former Bordeaux player has spent time on loan at Saint-Etienne, Sivasspor and Bursaspor since rocking up at St. James’ Park, but is still around with two years left on his current deal. Nice work if you can get it.

Emiliano Martinez is Arsenal’s longest-serving player (yes, really) after Laurent Koscielny legged it to Bordeaux this summer. The Argentine is now the Gunners’ back-up goalkeeper following Petr Cech’s retirement, which means Macey is third in the queue.

He might be an Arsenal academy graduate, but Macey is also now 24 years old – an age at which regular football should be the priority, even for goalkeepers. After spending last season as Plymouth’s first choice, being back at the Emirates Stadium feels like a backwards step now.

Schelotto has had little to smile about in his two years at Brighton. He began life at the club as understudy to fan favourite Bruno, but briefly impressed during a spell while the Spaniard was injured… and then that was that.

Schelotto didn’t kick a ball for the Seagulls in a disappointing 2018/19, so joined Chievo on loan in January (which was slightly more fruitful). The Argentine has represented Cesena, Catania, Atalanta, Inter, Sassuolo, Parma and Chievo in Italy – but didn’t manage to seal a return before Monday’s deadline.

After failing to make an impact at Manchester City, Bryan joined Sheffield United in 2018 to finally get some first-team football under his belt. Or so he thought: the defender didn’t actually make an appearance last year as the Blades went up, thanks to a sorry combination of niggling injuries and illness.

United’s promotion hasn’t done his chances of regular game time any good, so a loan for the 2019/20 campaign would have made sense. It didn’t happen, though, and Bryan remains a Blade still waiting for that first minute.

Vydra’s form at Watford suggested that, like many strikers before him, he was excellent in the Championship but not cut out for life in the top flight. Burnley decided to test the water after the Czech bagged 21 goals for Derby in 2017/18, but the Clarets’ experiment hasn’t paid off.

Vydra has scored once in 13 top-flight outings for Sean Dyche’s side and is now behind summer arrival Jay Rodriguez in the pecking order. It’s a surprise that his previous record in the second tier didn’t earn him another move.

QUIZ! Can you name every Tottenham player with 5+ appearances under Mauricio Pochettino?