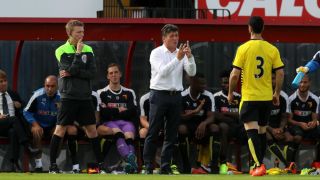 Watford were held to a 1-1 friendly draw at Woking in Walter Mazzarri's first game in charge.

Steven Berghuis fired the visitors in front in the first half, but they were immediately pegged back by Charlie Carter's leveller, and Woking battled to a hard-earned stalemate at the Kingfield Stadium.

Captain Troy Deeney was missing for Watford with a slight knock, but they started in fine fashion and were in front within 20 minutes, as Berghuis's deflected strike squeezed into the net.

However, Woking were soon level, with substitute Carter profiting from a goalmouth scramble.

In the second half, there were debuts for Mazzarri's new front men Jerome Sinclair and Isaac Success, but neither could net a winner, despite the former's best efforts.

Mazzarri, who has replaced Quique Sanchez Flores, will now take his side to Stevenage's Broadhall Way on Thursday for their second game of pre-season.