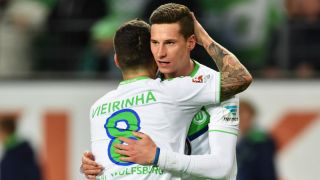 Wolfsburg's Bundesliga struggles continued as they had to settle for a 1-1 draw with Cologne at the Volkswagen Arena on Sunday.

Dieter Hecking's men last tasted top-flight victory on November 21 when they beat Werder Bremen 6-0 and have since gone six matches without a win.

Their poor run of form has seen them drop to seventh, four points off fourth-placed Bayer Leverkusen as they chase Champions League qualification again.

Wolfsburg were still without top scorer Bas Dost due to injury, with the Dutchman expected to be out of action until March, and the towering striker was sorely missed as the home side failed to convert any of their chances in the opening 45 minutes.

They eventually went a goal up halfway through the second half, though, via Julian Draxler. Vieirinha provided the assist and the former Schalke man volleyed home from inside the area.

Cologne hit back just eight minutes later through Anthony Modeste. Leonardo Bittencourt set up the Frenchman with a clever pass and he finished coolly from just inside the box.

Wolfsburg pushed hard for a winner in the remainder of the game, but failed to net a second time as Cologne held out for a draw.