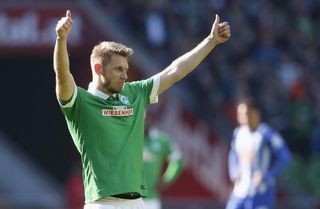 The 27-year-old's contract at the Weserstadion will expire at the end of June, and he leaves having played 215 times in the Bundesliga after coming through the club's academy.

However, he moves to the Volkswagen Arena on a three-year contract and the three-time Germany international is looking forward to a new challenge.

"Wolfsburg offers me a great opportunity to keep playing at the top level," he said.

"I was at Bremen a long time, achieved a lot with Werder and had some incredible years there. But the time had come to try something new. I'm really looking forward to meeting my new team-mates, and to the challenges awaiting me in Wolfsburg."

Bremen finished 12th last season, with Hunt scoring seven times in 31 league matches, although he links up with a Wolfsburg side who will play in Europe next term.

Having qualified for the UEFA Europa League courtesy of a fifth-place finish, coach Dieter Hecking hopes Hunt's European experience will come in valuable, having previously played in the Champions League with Bremen.

"Aaron's a real all-rounder who can fill just about any position in the middle of the park, as well as posing a genuine scoring threat," Hecking explained.

"He's just the type of player we were looking for. On top of that, he's got a lot of games under his belt both in the Bundesliga and international competition.

"That's valuable experience to add to our young team."