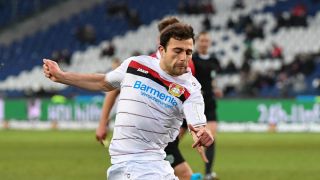 Wolfsburg have announced the signing of Admir Mehmedi, the striker joining from Bayer Leverkusen.

The Switzerland international has started eight Bundesliga games this season, scoring two goals, and has signed on a four-and-a-half year deal.

Mehmedi will wear the number 22 during his Wolfsburg stay and head coach Martin Schmidt hailed the arrival of the 26-year-old.

"Admir has a lot of experience, but is far from having reached the end of his development," Schmidt told Wolfsburg's website.

"With him, we have more options in the attacking game, are even more complete and thus harder to figure out."

BREAKINGOur Wolves have secured the services of Admir from ! The 26-year-old has signed on with VfL until 2022 and will wear the number 22 jersey. We're looking forward to having you here, Admir! January 31, 2018

Former Freiburg striker Mehmedi has hit 23 goals in 122 Bundesliga games and is keen to get started at his new team.

"Wolfsburg is a very renowned club and enjoys a very, very good reputation in my home country because of its Swiss past," Mehmedi said.

"I am very happy that the change worked out and I hope to be able to do my part to make sure that VfL have a successful second half of the season."