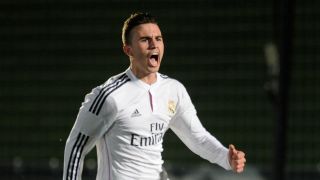 Wolfsburg have completed the signing of Borja Mayoral from Real Madrid on a one-year loan deal, with the intention to extend his temporary stay at the Bundesliga club with one additional season.

The 19-year-old forward already confirmed earlier this week that he would continue his career at Wolfsburg and the striker has now put pen to paper.

Mayoral will join his team-mates at their training camp in Bad Ragaz on Saturday and will be unveiled on Sunday.

"We have been keeping a close eye on Borja for quite some time and are very happy that he has decided to join Wolfsburg," sporting director Klaus Allofs said.

"He is still at the start of his career and can take the next step here at Wolfsburg. It's part of our strategy to not only bring through our own youngsters, but also give foreign youngsters a platform to develop, just like with Josip Brekalo and Victor Osimhen."

Mayoral made his first-team debut in 2015-16, but the return of Alvaro Morata from Juventus saw him drop down the pecking order at Madrid.

He therefore opted to leave the Santiago Bernabeu in order to gain valuable first-team football elsewhere.

"I want to play and win as many games as possible at Wolfsburg," the Spain Under-21 international stressed.

"We want to qualify for the Champions League again and I think the team has the potential to do that.

"I had a great feeling about Wolfsburg right from the start. I am looking forward to getting started."