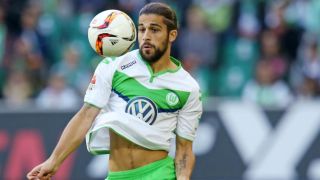 Wolfsburg managing director Klaus Allofs has dismissed rumours linking left-back Ricardo Rodriguez with a move to Real Madrid and insisted the Swiss is not for sale.

Rodriguez has been mentioned as a Madrid target for several months but the rumours have intensified in the past week with the Spanish giants having been handed a two-window transfer ban by FIFA for breaches "relating to the international transfer and registration of players under the age of 18".

The ban takes effect after the January transfer window, meaning Madrid have a fortnight to bolster their squad with players they can field immediately.

Madrid have little cover for first-choice left-back Marcelo but Allofs is adamant Rodriguez will not be moving to the Santiago Bernabeu.

"You can forget it, we certainly will not be doing that," the former West Germany international told the Wolfsburger Allgemeine Zeitung when asked about the possibility of selling the 23-year-old.

Wolfsburg signed Rodriguez from FC Zurich in 2012 and he has gone on to establish himself as one of the leading full-backs in the Bundesliga.