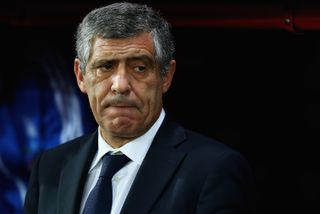 The Greeks only lost once in qualification but missed out on an automatic qualifying spot by goal difference to Bosnia and Herzegovina.

With the political issues currently dominating headlines in Greece, Santos believes a play-off victory over Romania will provide a boost to the struggling nation.

The Portuguese tactician's only other appearance at a major international tournament with the country came in 2012, as Greece proceeded to the quarter-finals of the European Championships.

Santos would love to emulate that achievement in Brazil but he did admit that before his side are to be successful, he needs to do his homework on opponents Romania.

"I think the most important thing is to learn Romania, because I don't know many things about Romania, and I need to learn much," the 59-year-old said.

"After that my team is ready to play this game, because these two games are very important for us."

The two sides will meet on November 15 in Greece, before they travel to Romania for the second leg, just four days later.