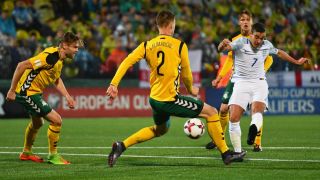 England debutant Harry Winks is determined to keep his feet on the ground despite harbouring ambitions of winning a "dream" World Cup spot at next year's tournament.

Tottenham midfielder Winks completed 90 minutes in his first senior international appearance as England completed their unbeaten qualifying campaign with a 1-0 win in Lithuania.

Called up to the squad as a late injury replacement, Winks repaid Gareth Southgate's faith with a composed display ahead of England's three-man defence in Vilnius.

And the 21-year-old is now focused on adding to his four Premier League starts in order to stake a claim for a place at Russia 2018.

"I was delighted with how I played. I thought the boys helped me settle in really well and it was a good team performance," Winks told FA TV.

"It all happened so quickly. It's been fantastic and I wouldn't change it for the world.

"Of course it's a dream [to go to the World Cup], it's every player's dream, but it's a long way away and a lot can happen in that time.

"Most importantly I have to play well for my club. As long as I keep my head down and keep working hard then who knows."

"I thought he played really well, he was probably one of the best players on the pitch," Kane said on Sky Sports.

"I'm delighted for him. He probably wasn't expecting to even be in the squad. He should be very proud."