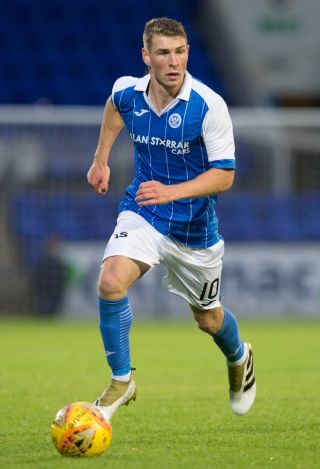 A late David Wotherspoon strike saw St Johnstone snatch a 2-1 win over Kilmarnock which moves then level on points with their seventh-placed opponents.

It was the ideal result for Perth manager Tommy Wright, who had lost top scorer Matty Kennedy to Aberdeen on Friday night and expressed frustration with the lack of signings sanctioned so far by the club’s hierarchy.

Midfielder Wotherspoon’s late volley made sure of the points after a hotly disputed Chris Burke penalty had levelled Ali McCann’s early opener for Saints.

In the 19th minute Perth centre Stevie May dispossessed Alan Power in midfield but defender Stuart Findlay backtracked to thwart his attempt to play in the unmarked Chris Kane.

Killie drew level from the penalty spot in the 22nd minute.

Two minutes later, a foul on Burke earned Wotherspoon a caution and keeper Clark palmed the attacker’s 20-yard free-kick over the crossbar at full stretch.

Then it was Kilmarnock’s turn to complain about a refereeing decision, when home midfielder Jason Holt handled in the area without any repercussions.

Minutes after the restart May’s glancing header on a Wotherspoon corner was deflected wide of the far post.

In the 61st minute another Wotherspoon corner posed problems for the hemmed-in visitors’ defence.

This time, Saints skipper Jason Kerr rose to connect from around the penalty spot but his mistimed header drifted wide.

Killie emerged from their shell to force a corner of their own but Wotherspoon rose to head away Burke’s delivery to the front post.

Neither keeper was being overworked but Jan Koprivec had to produce a superb top-corner save 12 minutes from the end to deny Perth substitute Callum Hendry when the youngster unleashed a powerful free-kick from 30 yards.

However, Wotherspoon clinched a vital win for Saints in the 78th minute when his controlled right-footed shot evaded the grasp of Koprivec to nestle in the corner of the net.