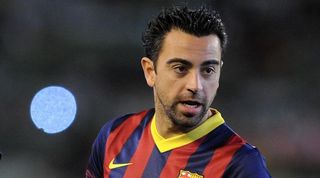 Barca avoided a fourth consecutive defeat thanks to a come-from-behind 2-1 win at home to fourth-placed Bilbao.

Gerard Martino's men moved within four points of the summit, although leaders Atletico Madrid remain in the box seat with four matches remaining.

However, Xavi says the Catalan giants will fight to the very end to defend their league crown.

"We knew how important today's game was, even though we don't have matters in our own hands," said the Spain international. "It is important to win and wait and see what happens.

"In general I think we played well both in attack and defence. To go out of the Champions League and lose the final of the Copa del Rey were two huge blows for the team, but we need to overcome them.

"Now we have to continue at the top of our game because this team still needs to fight."

Lionel Messi was the hero for Barca, finding the back of the net with a 74th-minute free kick after Pedro had restored parity two minutes earlier.

It was another reminder of Messi's qualities in the wake of fierce criticism from the Spanish media, who pointed the finger at the Argentinian star following the club's three-game losing streak.

"A lot of the time people demand too much of him. We need to leave him in peace and let him work."