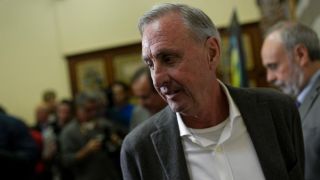 Barcelona great Xavi has hailed Johan Cruyff as the father of modern-day Barcelona.

Xavi, who now lives and plays in Qatar, credited the Dutch great – who died on Thursday following a battle with cancer – as the man behind the famous Barcelona philosophy.

"Changing Barcelona's football philosophy would be extremely difficult. And we would be making a huge mistake if we ever consider changing the team's philosophy," he told the New Arab.

"Johan Cruyff established the team's philosophy 30 years ago and since then it has not changed.

"Every manager has his thoughts on how his team should play, [Pep] Guardiola reached perfection in his managing and Enrique developed the team according to his way of thinking by relying on Neymar, [Luis] Suarez and of course [Lionel] Messi."

The former Spain international added: "The difference is that Barcelona today doesn't need 50 passes to reach the other team's goal and score. Thanks to these three players, creating opportunities doesn't require a lot of passes.

"Enrique hasn't changed Barcelona's philosophy, he has evolved the team while holding on to its core philosophy. The biggest mistake that could happen to Barcelona would be signing a manager who has his own philosophy that he wants impose on the team.

"Thanks to this philosophy we have won many titles."