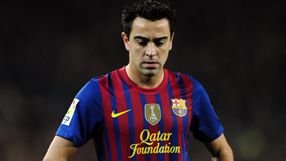 The 32-year-old Spain international came on as a substitute against Athletic Bilbao in La Liga at the weekend and has missed the last two training sessions.

"His calf has been playing up for the last couple of days and we preferred not to force it today," coach Pep Guardiola told a news conference on Monday.

"He will take a fitness test on Tuesday morning. He is in the squad and that is because there is a chance he could play."

Holders Barcelona are bidding to join Real Madrid as only the second club to have reached a fifth consecutive semi-final in Europe's elite club competition.

They will need to break down a resolute Milan defence who held them 0-0 at the San Siro last week.

Guardiola said he was expecting the Italians to defend deep and in numbers once again and that his side would probably have to score more than once.

"We have to generate as many dangerous scoring opportunities as possible," he said.

"I reckon we will control the game but we need to find ways to carve openings near their goal.

"We are not overly concerned about stopping them from scoring, because I am pretty sure they will.

"It would be a great success to reach a fifth consecutive Champions League semi-final. It is a major achievement to be within reach of this. It is one of the things I am most proud of."

World Player of the Year Lionel Messi was kept relatively quiet by his standards in Milan, but with 56 goals to his name in all competitions this season, Guardiola joked with Italian journalists about writing him off.

When it was pointed out Messi had only ever scored one penalty in seven matches against Italian opposition, he said: "He hasn't scored because Italians are very good.

"I hope Messi scores, he will need help to find the spaces, but beware those who say he never scores against Italian teams. We'll see what happens."

Messi, who has scored 12 goals in Europe this season, is one away from setting a new Champions League record.