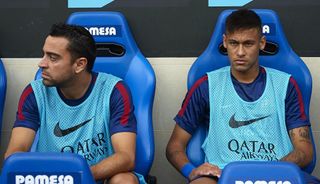 The 34-year-old is a legend at Camp Nou having won seven Liga titles and three UEFA Champions League during a distinguished career in Spain.

Xavi's time with the Catalan club appeared to be coming to an end in the close-season when he was linked with a move to Qatar or the United States.

However, he opted to remain with Barca with the club undergoing somewhat of a transitional phase having appointed Luis Enrique and made several alterations to the playing staff.

Xavi has played somewhat of a peripheral role so far this season, though, making just one league start and he is determined to win back his place in the starting XI.

"I want to play as much as possible and change my situation, but the team comes first and it's the coach who decides," he said at an event for adidas.

"It's been a hectic month and I'm going to fight in order to continue to be an important part of this team. I'm not happy to sit on the bench.

"Now it's down to me to cope and enjoy the playing time that I get. It isn't a dramatic situation for me and I'm trying to turn it around so that I feel more useful. I'm happy that I stayed at Barca."

Xavi continued by confirming he was not guaranteed playing time by Luis Enrique and says he is not considering his future beyond this season.

"I didn't make any prior agreements with Luis Enrique regarding my role," he added. "I'm not thinking about anything else. I don't have any targets.

"I just want to enjoy what comes and hope the team continue to win."