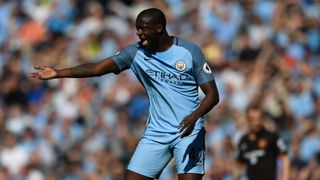 Yaya Toure hopes to extend his contract at Manchester City so he can finish his career at the Etihad Stadium.

The midfielder's future at City looked bleak early in the 2016-17 campaign as he was frozen out by Pep Guardiola, but he regained his place in the first team and has cemented that role in recent months.

The former Barcelona player has made 31 appearances in all competitions - scoring seven goals - but must wait and see if he will be at the club next season, with his contract set to expire in June.

Toure remains hopeful a new deal will be forthcoming but acknowledged the decision is out of his hands.

"Football is strange," said the Ivorian. "I want to say a proper goodbye. I want to be honest with the fans because those guys, for all the time I've been playing, those fans have been so special and the club has been good to me.

"I'm capable of playing more. I need to be honest, I'd love to play more but I just want that when I finish I can finish at City. That's what I want but we will see.

"I want to but after that it's the chairman etc. It's no longer a game of football.

"You know my intention is not bad. It's just about the fans, the club. All the time I go the pitch I'm always grateful.

"What I did for the club, they always recognise and it's something special. You can always go somewhere else but where the fans care about you is the most important thing.

"For me, it's not about the money or other things it's about the fans and for them I can stay, but we'll see."