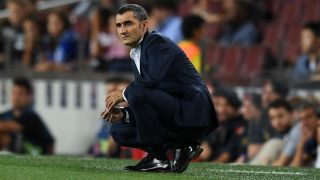 Barcelona boss Ernesto Valverde sees no reason why Real Madrid should expect a year of transition after sacking Julen Lopetegui.

The former Spain head coach was dismissed on Monday in the wake of the 5-1 Clasico thrashing at Camp Nou, a result that left Madrid with only one win in seven matches.

Santiago Solari has been placed in temporary charge of the first team while a long-term successor is sought, with Antonio Conte and Roberto Martinez the reported favourites.

Despite the uncertainty around the coaching position, Valverde does not believe Madrid should be discounted from competing for major honours this season.

"I don't think that exists," he told a news conference when asked if Madrid are entering a transitional year. "Madrid are like us and they will respond, I've no doubt about that. They're not among the top few, but it's still early.

"They're in every competition and they will try to win the championship, as we and the rest will."

The players and Santiago Solari, who is in temporary charge of the team as first-team coach, are training at ahead of our first match of the season. October 30, 2018

Lopetegui's dismissal was confirmed via a ruthless statement from Madrid, in which the club highlighted the "large disparity" between results and the strength of the squad.

"I don't have anything to say on the statements made by other clubs. I only say that I don't like it when coaches are sacked," he said.

"We're in the world of football and we know how it goes. Everything forms part of the show.

"There are ups and downs and if you win, it's all calm, which is what we aim for, and if you lose there are stormy waters."

Barca take on Cultural Leonesa in the Copa del Rey on Wednesday in their first match since the Clasico triumph, Valverde's first at Camp Nou since taking charge in 2017.

He dismissed the suggestion the result has in any way changed his day-to-day life, though.

"I'm exactly the same as I was a week ago, and the week before that. People are happier and that makes everything calmer," he said.

"I'm disappointed because I thought I'd have superpowers, but no!"