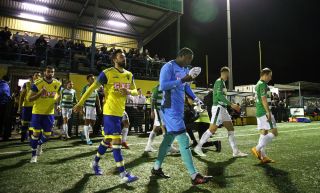 Yeovil safely secured their place in the FA Cup first round with a 3-0 win at Haringey, but most importantly the tie played out with no incidents off the pitch as the clubs were able to bring a difficult period to an end.

Chris Dagnall was at the double for the visitors, with Luke Wilkinson also on target at Coles Park in this replayed fourth qualifying round fixture.

The first tie had been abandoned midway through the second half on October 19 following an allegation of racist abuse which led to Borough manager Tom Loizou walking his players off the pitch.

Haringey defender Coby Rowe confirmed on Twitter after he had been a victim of racism while goalkeeper Valery Pajetat was spat on and had a bottle thrown at him, according to chairman Aki Achillea.

An investigation by the Football Association was started with two men arrested before they were released on bail, but crucially this fixture had no incidents with Yeovil coming out on top and qualifying for the next round.

Loizou selected both Pajetat and Rowe – the duo at the centre of the original abandonment – and nine of the team which faced the National League side previously.

Racism had been in the news again earlier in the day with the Bulgaria Football Union fined £64,641 and ordered to play their next competitive home game behind closed doors following the racist behaviour of their fans during a fixture with England on October 14.

The hope at Coles Park was the focus would remain on football and that a cup shock could be on the cards with Yeovil two divisions above Borough and until May a Football League club.

A reminder of the events from 10 days ago was present in all four corners of the ground, though, as an area behind the goal Haringey were attacking in the first half was sectioned off while at the opposite end of the pitch a sign read: Haringey Stand Up To Racism.

In the main stand was a giant Kick It Out flag plus on the other side of the stadium on White Hart Lane was a ‘Show Racism The Red Card’ banner.

The two teams were not letting it affect them as Jorge Djassi-Sambu called Yeovil goalkeeper Stuart Nelson into action in the 16th minute before the Glovers responded two minutes later as Albi Skendi’s shot across the face of goal just avoided Gold Omotayo.

Having weathered an initial storm, Darren Sarll’s team were beginning to show why they are on course for an immediate return to League Two and took the lead in the 30th minute much to the delight of the smattering of fans who had made the long trip from Somerset.

Omotayo should have scored from close range, but Dagnall spared his blushes by tapping in from a yard after Myles Hippolyte reacted quickest to the loose ball and it remained that way until half-time.

Borough were waiting for a big chance and it arrived in the 50th minute when one-time Cyprus international Georgios Aresti sent Dimitrios Froxylias through on goal, but Nelson made himself big and blocked his effort.

This would prove crucial for Yeovil as seven minutes later they made it 2-0 when Lawson D’Ath’s corner was headed home by Wilkinson with Pajetat in no-mans-land.

Set-pieces were proving Haringey’s undoing and the away side scored another with 62 on the clock when Dagnall volleyed home after Pajetat had spilled a cross.

Not that this deterred Borough’s vocal support or players, with Rowe denied a brilliant goal via a free-kick by an equally excellent save from Nelson.

More opportunities were forthcoming for the hosts, but it finished 3-0 to Yeovil and they will host fellow National League side Hartlepool in the first round on November 9.

Pools were today charged with misconduct by the FA with a breach of FA Rule E20 in relation to a match with Dover last month where opposition player Inih Effiong was subject to alleged racist abuse.