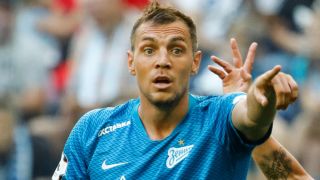 Minsk had appeared set to cruise through the tie after easing to a 4-0 success on home soil last week.

But two goals in either half from Zenit pushed the second leg beyond 90 minutes before a further four - including two penalties - secured their place in the play-off round in incredible circumstances.

Artem Dzyuba was the chief destroyer with a hat-trick, his first two goals coming in the final 15 minutes of normal time.

Zenit were by then battling a numerical disadvantage after Leandro Paredes, who netted the opener from a floated free-kick, was dismissed for a second bookable offence with 18 minutes remaining.

Christian Noboa was also on target amid a comeback that threatened to be derailed when Seidu Yahaya put Minsk back ahead on aggregate in the 99th minute.

That only set the stage for further twists, with Sebastian Driussi soon bringing scores level and Dzyuba capping his treble from the spot, before Robert Mak added two more in stoppage time to cap off the rollercoaster rout.

Zenit will now meet Molde, 3-0 winners over Hibernian, for a spot in the group stage.