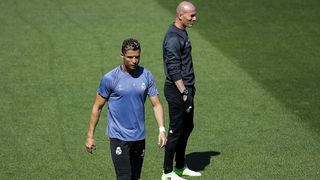 The Portuguese star remains the subject of growing speculation over his future, with reports suggesting Ronaldo is unsettled at the Santiago Bernabeu.

It stems from the 32-year-old's apparent displeasure at his contract, with Barcelona rival Lionel Messi and Paris Saint-Germain's Neymar said to be on higher wages.

But Zidane is confident Ronaldo will stay with Madrid for the remainder of his career.

"I cannot imagine a Real Madrid without Cristiano," he said ahead of the club's LaLiga match at Celta Vigo on Sunday.

"He is a Madrid player and what he wants is to finish his career here. I do not see him playing anywhere else.”

The European champions, who trail league leaders Barcelona by 14 points, are thought to be in the market for a goalkeeper – with Athletic Bilbao's Kepa Arrizabalaga heavily linked – but Zidane is keen to stay loyal to his existing squad.

"I do not need a goalkeeper at the moment," he said. "In June if there are changes, and we sit down and talk, maybe there are positions we can sign players. But today I do not see that.

"I do not want anyone, as I am happy with my squad. I remember last year there were no problems like this, as Madrid was doing well, playing well.

"But when a team is going [on] a bit [of a] bad [run], as can happen sometimes, there is talk of transfers. But I am not that type of coach.”

Zidane will be without Sergio Ramos for this weekend's match as the defender has a calf problem, but the Frenchman expects to see his side on top form regardless.

"We must hit our level now and show what we can do," he added. "We have no room for error left this season, but we are very excited about that. That is what motivates us.”