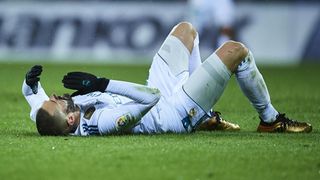 Zinedine Zidane insists Karim Benzema suffered his hamstring strain during El Clasico amid on-going speculation the striker was in fact injured while on holiday.

Benzema was substituted after 66 minutes of Madrid's sapping 3-0 defeat Barcelona at the Santiago Bernabeu on December 23.

Seven days later, the Spanish and European announced the Frenchman would be sidelined and this gap between the injury being suffered and confirmed contributed to Zidane fielding a sustained line of questioning before Madrid's Copa del Rey trip to Numancia.

"There was talk that he had something before the game, that is lies for me," he said.

"I trust in the player, nothing else. He picked up a problem in El Clasico.

"After the game he felt something and then we didn't know exactly what it was. We had tests.

"We thought it was just a knock and then during the holiday we realised it was something a bit more serious after the scan.

"He's been on vacation like everyone else but he's back and it's still not right. He did not get injured on holidays, he was injured before he left."

One man who is fit to feature against Madrid's second-tier opponents is Gareth Bale.

The Wales forward featuring as a late substitute against Barca following his latest calf-injury absence.

"It's very important he gets a run of games," Zidane added. "He's fine. He's training well and he'll be with us tomorrow and we'll see.

"The idea is now that he will start and hopefully play regularly in every game."