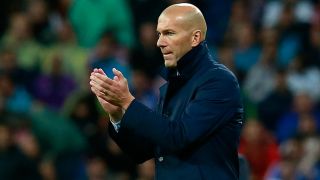 Zinedine Zidane was frustrated with Jesus Vallejo's red card on a night when everything else went Real Madrid's way in the Copa del Rey.

The defender largely took his chance as the European champions cruised to a clean sheet. However, as they led 2-0 in the closing stages - courtesy of two penalties - the debutant rashly lunged in on home captain Luis Milla and saw red, blotting an otherwise spotless copybook for Zidane and his side.

"I cannot be happy - he's not happy about the red card," the coach said. "But I'll stick with how well he has done in the game, I'll take that and that's why I'm happy."

Beyond Vallejo's misdemeanour, Zidane had only praise for his side.

He added: "We had patience, we scored two goals and we didn't concede. All of the players have played a great game. That's what matters and we're all satisfied with the result."

Vallejo was not the only player to benefit from the absence of big hitters such as Cristiano Ronaldo, Sergio Ramos and Luka Modric, with Marcos Llorente also delighted to be given a chance.

"The coach makes sure all the team is involved," Llorente said. "He gives us opportunities and today we played a great game."