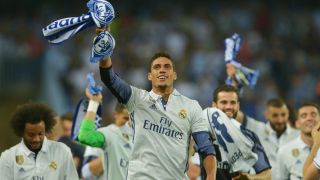 Raphael Varane believes Zinedine Zidane is the key to his continued success at Real Madrid after extending his contract with the club.

The France international is now tied down at Santiago Bernabeu until 2022, having won the Champions League under Zidane in each of the last two seasons.

Discussing his new deal, Varane revealed that his compatriot coach - previously an advisor at the club and boss of the B team Real Madrid Castilla - had been highly influential in his initial signing from Lens and he is glad to now work with the World Cup winner on a daily basis.

"[Zidane] was fundamental to me coming and now he's the coach who helps me every day," Varane told a news conference.

"I thank him for his support and his confidence. He gives me advice and he is a person we respect a lot and listen to when he speaks."

"I have learned a lot at this club. Every season is a challenge and now I am a more complete player. I have learned at the highest level. In every training session, I learn.

"I consider myself to be from Madrid because I arrived very young, but I do not forget my years in Lens - of which I am also proud."

Varane was also asked of team-mate Cristiano Ronaldo, who netted twice against Borussia Dortmund on Tuesday after going his previous two games without a goal.

"For me, you can only admire him for what he has done and what he coninues to do," he said of Ronaldo. "The numbers speak for him, he is so good.

"It is fantastic that he makes history in football and you cannot criticise him."