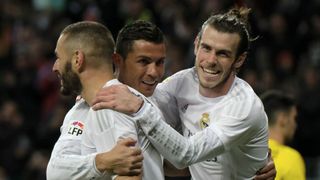 Ronaldo, Bale and Benzema are all in line to play in Saturday's showdown at Camp Nou, although Madrid have lost each of the three previous matches against Barca when they have been able to field their star triumvirate.

While impressive, their on-field exploits have generally paled in comparison to Barcelona's formidable combination of Lionel Messi, Neymar and Luis Suarez over the past 18 months.

When told at his pre-match news conference of his forwards' 0-3 record against Barca, Zidane said: "Tomorrow is the day to change that and we will try."

Ronaldo got on the scoresheet in the 4-0 win over Sevilla before the international break after firing a penalty over the bar, but Zidane was heartened to see the player end four international matches without a goal when Portugal beat Belgium 2-1 in midweek.

"No I don't worry about Cristiano's recent penalties," the Madrid coach said.

"Sometimes you miss, it is part of football. It can happen from time to time. He answered everyone versus Belgium.

"He has come back well after the break and I am happy with him."

Benzema was absent from the final France squad to be selected ahead of Euro 2016 as an ongoing consequence of his involvement in the ongoing Mathieu Valbuena sex tape blackmail investigation.

Zidane was eager to focus on El Clasico and offered backing to his centre-forward.

"I don’t want to avoid the question but now I don't think about Benzema with the French national team," he added. "Only about him versus Barca.

"You know what I think about Karim and what he can do for Real Madrid."

Zidane's first Clasico as a coach comes with Luis Enrique in the opposite dugout, with a heated on-field confrontation from the duo's playing days on either side of Spanish football's most bitter divide garnering plenty of pre-match attention.

"What do you mean?" Zidane joked. "Sometimes things happen on the pitch, what happened with Luis Enrique on the pitch is forgotten."