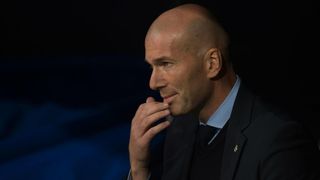 Zinedine Zidane has announced that he is leaving Real Madrid less than a week after guiding them to an unprecedented third successive Champions League title.

The club revealed on Thursday that Zidane was to appear in a hastily arranged news conference that caught many by surprise, fuelling speculation that his tenure at the Santiago Bernabeu could be coming to an end.

Zidane confirmed his departure at the start of the briefing, just five days after he presided over the 3-1 Champions League final win over Liverpool.

Such success, which he also managed in each of his first two seasons in charge of the team, has not been enough to prolong his spell.

"I have decided not to be Real Madrid coach next season," said Zidane, who was joined by club president Florentino Perez.

"I spoke to Florentino yesterday [Wednesday] to tell him my thoughts, my feelings. I know it's a strange moment for everyone involved, but I think it's the right decision.

"I think this team needs to keep winning but I think after three years a change is needed, something different, a different message, different ways of going about things.

"That's why I decided to take this decision. It's a club I love and I love the president too, he brought me to this huge club and I will always be grateful, but I think a change is needed so I will not be here next season."